As I wrote in the last post Christmas time just wasn’t here in Japan. Maybe if I came from the west coast like the majority of my peers I would’ve been more used to it, but alas the heart of the country always offers snow, time with family, warm blankets, and good food.

I guess one out of four isn’t too bad.

I went to work on Christmas day, a mere two days into Winter Vacation looking forward to relaxing a bit without any classes. After all, the picture above is literally what I came home to so it’s not like I could complain about the weather. Remember I’m still walking to school every morning (uphill both ways if it rains).

It’s a bit weird because this was basically my first time experiencing a school break since in the summer I had only just arrived and didn’t know what the hell I was doing. Also during that time everyone was still around because of the Sports Festival, the Culture Festival, and just generally kids in this town don’t have too many other options as far as places to hang out. Now it’s a bit different because the end of the year happens to be a pretty big holiday in Japan with a decent amount of meaning attached to it so people tend to have better things to do than go to school. Unless you’re a teacher of course.

So there I was, without much direction, without even my American co-worker (who decided to go back to America), having the weirdest Christmas to date, sitting in the teacher’s room trying to plan what I’d be doing for the rest of the day when one of the teachers comes by and asks if I’d like to make soba.

“Right now?” I think at this point plenty of responses would’ve been appropriate, just cracking ten o’clock this did not seem like the right time to be making soba. But it’s not quite like I had anything else to do so, I followed him and a group of other teachers out and down to the home ec classroom.

They quickly unpacked all the good and I saw how much of operation they planned. One of the older teachers said that he usually made soda once a week, so I did my best not to look like a fool when he was teaching me the techniques.

Up until now I haven’t really ever looked at the food that I was eating. Occasionally – especially when having yakisoba – I’ve tried to discern what exactly goes into the dish so that I can try and buy and make the foods myself. The biggest problem I’ve found is so many ingredients in Japan are misleading at first glance. Take for example daikon (in the picture above). It’s a unique Japanese vegetable whose name literally translates to “big root.” I’m not quite sure how to explain its flavor. It’s sweet and bitter like an onion with the texture of a potato but seems more like a radish on steroids.

The actual materials that go into soba noodles are equally as flummoxing. As far as I can tell soba is the literal word for buckweat, but otherwise it’s sometimes used to refer to any sort of thin noodle. (For me this was a huge revelation when I finally understood that yakisoba is not made with soba noodles.) And the actual process of making the noodles only included two ingredients: buckwheat flour and water (and you can hardly include water as an ingredient).

Luckily the process of folding the dough and then rolling it out was as simple as the ingredients and coming from a family of bakers and cooks I think I got the gist out of it pretty quickly.

We also made a crap ton of dough. I wasn’t even sure what kind of time was passing because I was so focused on making the stuff. We were doing all this for some sort of holiday cafe. Obviously it was all on school time so we had to have some sort of focus for it. As we were going occasionally one teacher would peek in and ask if it was ready. Most of them were engaged in whatever sports club they were leading so they still had a lot of free time.

After rolling out the dough for the longest time, we folded it delicately in half three times and then brought out the biggest knives I’ve seen. In fact they could’ve easily been mistaken for butchering, but they were specifically made for the sole purpose of slicing these noodles.

When they’re all chopped the cooking process doesn’t take any bit of time. I’d say they can’t being in the boiling water for over two minutes and I was taught to let the water get to boiling over at least twice before you knew they were ready. Noodles, I find, are such a particular thing. Some people prefer them firm, which I’ve never really noticed or understood, but if you don’t pay extreme attention to them then they’ll instantly become chewy pieces of goop. So I think I got the gist of how to cook them, but really I can’t really know if anyone else noticed.

Also an unusual thing we were doing, at the end, was dunking them in ice water. Because of all the flour, the noodles need to be washed vigorously. I haven’t really figured out how you would serve them hot, or even if this recipe produces that kind of soba, but all the well, our noodles would be served cold. Which before thinking about it might seem try, after trying it is unusually delicious. I can only compare them with a pasta salad, but coming from America all my pasta salads have been drenched in mayonnaise or salad dressing. Instead this was pretty fresh on its flavors. 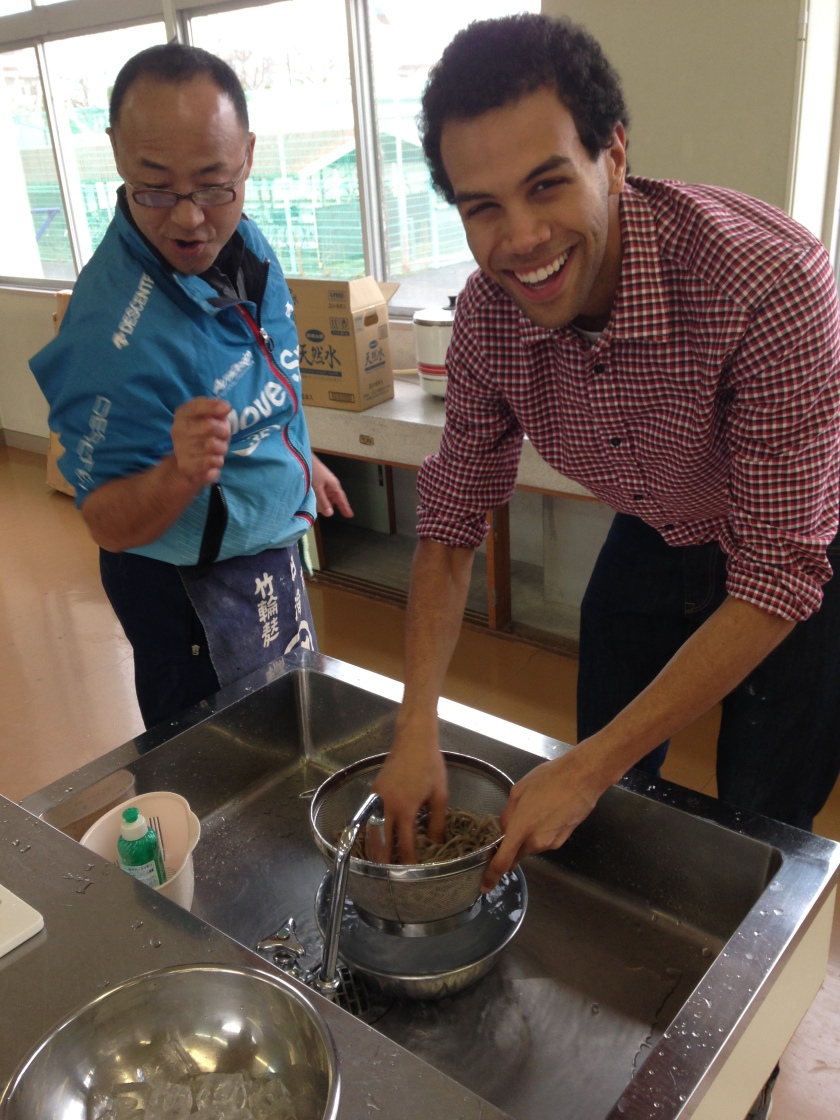 With the combined ingredients and a little bit of soy sauce to fill the bowl it was a tasty snack, a filling lunch, and definitely a new favorite. I’ve been told it gets to be a great refresher in the summer when you don’t want something hot. Although, without the materials I doubt I’ll ever be able to make it at home, at least this time I’ve got all the ingredients checked off so I can actually buy them and know what to do with them. If we could do this every holiday I think I’d be set. For now maybe I’ll just try to convince the Home Ec teacher to let to sit in on the classes where they cook food. I’ve seen the kids skewer and fry whole fish, so it’d probably be a good way to get over my queasiness of cooking with foods that have eyes still attached to them. After all, my hatred for the niboshi they serve in the school lunch has slowly diminished.

Anyway, a big hit and fulfilling Christmas. In the end I could do without the snow and warm blankets, and it was spent with what’s become a kind of family, at least the closest I can get within three thousand miles. Itadakimasu.