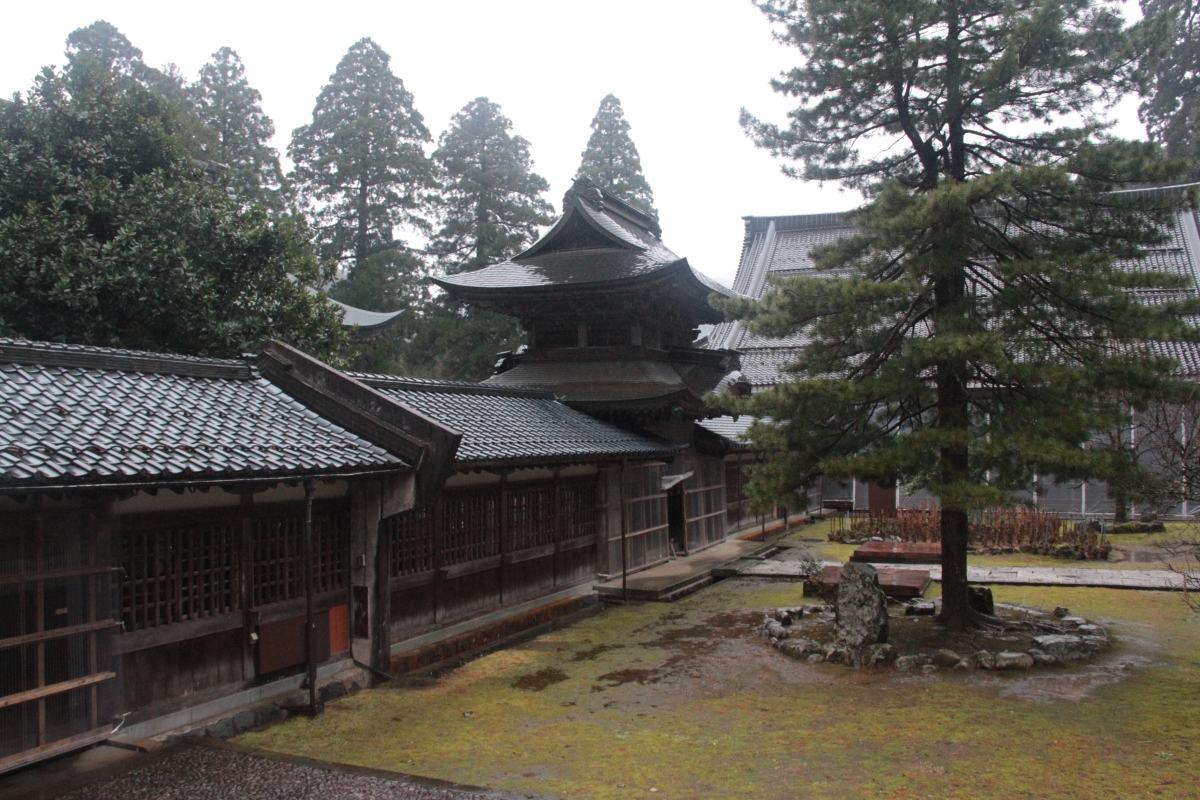 Previously I said that I wouldn’t be making any resolutions for the new year. In reality I think it’s almost impossible to follow that rule, or at least unlikely that you can avoid the influence and meandering thoughts that consider what part of your life needs improvement. In past years I’ve had some success with these ideas: giving up pop (soda), learning guitar, writing more; I’ve also had some short lived denials: keeping a planner, travelling the world, writing more. From the past couple of years, I’ve resigned to not make any changes in a life which on a whole is pretty content.

With everything in mind, though, it’s still hard not to try the future outlook, especially with the unique and impermanent situation I find myself in. For example, I’ve been living in a foreign country for four months and still haven’t really made any native friends. OK, so that’s not entirely true when you factor Yukie and my two English-speaking co-workers, but even they’re not particularly the company I can unwind with completely. Similarly when I lived in New York I had a similar series, where it basically wasn’t until the third month that I finally went out with someone I hadn’t known in college. So if the new year isn’t a time for me to make new guidelines or set out to achieve goals, I think it can be a period for me to completely reset.

Basically a winded entry into discussing my new habit of approaching every weekend fresh. I never decided to make the most of my time, and I haven’t really sought anything out. Maybe my zest for exploration is just continuing off the curtail of my winter vacation excess. As it had just seemed right to finally go out and surf, it also just seemed right that I’d finally make it to the oldest temple in Japan.

Besides, I didn’t really have anything better to do, and certainly wouldn’t have had any other plans, as I rode my newly donated bike to Yukie’s house on a cloudy but fine Sunday morning. She greeted me with her lap dog in her arms and with a boisterous, “Hello! Shall we be going?”

We made a pit stop for gas and then stopped at a garden store where she picked up a couple of plants before setting off on our way. At least that’s what I thought until we stopped in the neighboring city. “Oh, why don’t we have obento, it’s really nice. You’ll like it, really cheap and beautiful.” 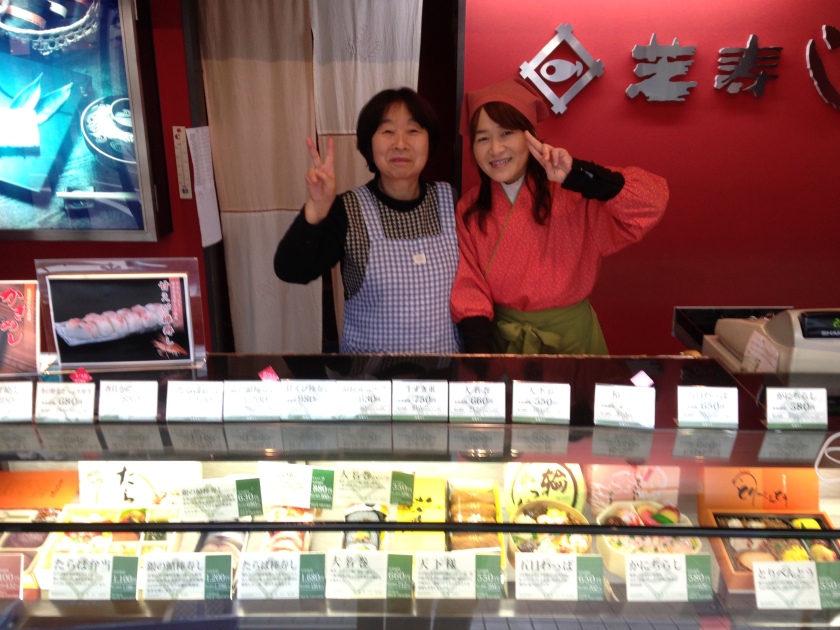 With the bento on board we were finally set. We drove about an hour away, past the city into the reclusive town of Eiheiji. Well, I guess reclusive is not the right word because, in spite of it being far out from the city with hardly any train access and a small population, it is among the most touristy places I’ve visited in Japan.

As we drove up to the castle we passed parking lot after parking lot with people outside them waving signs and trying to schuck the oncoming traffic into their lanes. “Oh we can get one much closer,” Yukie said, driving uphill at full course, “I know the place.”

We parked quite literally as close as possible in the back lot of a tiny souvenir shop. The weather was a bit cloudy but seeing how it’s winter you can’t ask for less. Although, I do think the whole area would look pretty great covered in snow. Because the area is pretty inland their chances are higher of having it, but apparently it had all melted the night before. Instead as soon as we were out of the car it started to drizzle rain. The woman running the souvenir shop handed us two umbrellas and wished us a good time. Sometimes nothing beats small town convenience. 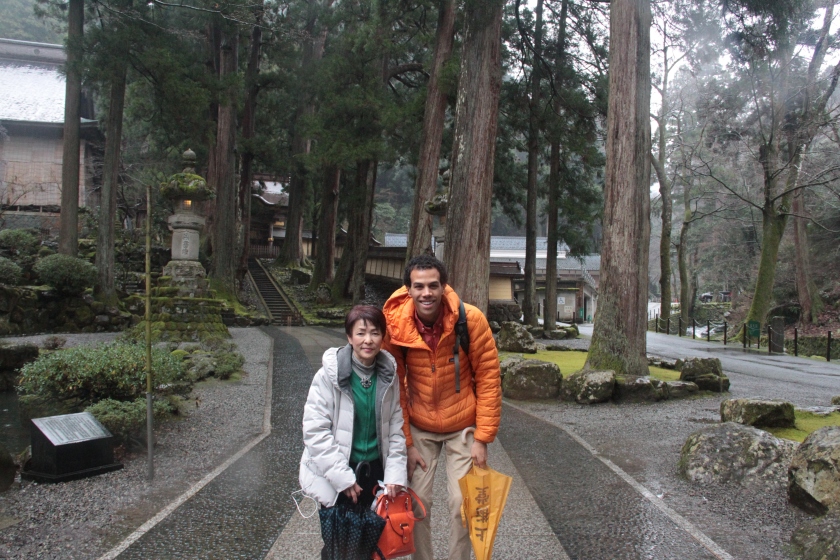 From the outside I wasn’t quite sure what to make of the temple. You really don’t see much of the grounds from the approach as it’s dug into a mountainside and surrounded by forest. From the entrance you meander down a hall taking off your shoes and being reminded not to take photos of special places or any of the monks there. I’ve yet to discover the reason behind this rule, but I suppose it’s probably to keep the temple separate from a full out tourist spectacle and respect the monks who practice there.

We followed a decent crowd up the staircase to a grand hall with a fantastic painted ceiling of individual vignettes depicting nature. It was a place you could easily just lie down in and spend over an hour wiggling around to glance each frame. I snuck (honestly accidentally) a picture with flash of what was probably my favorite scene: 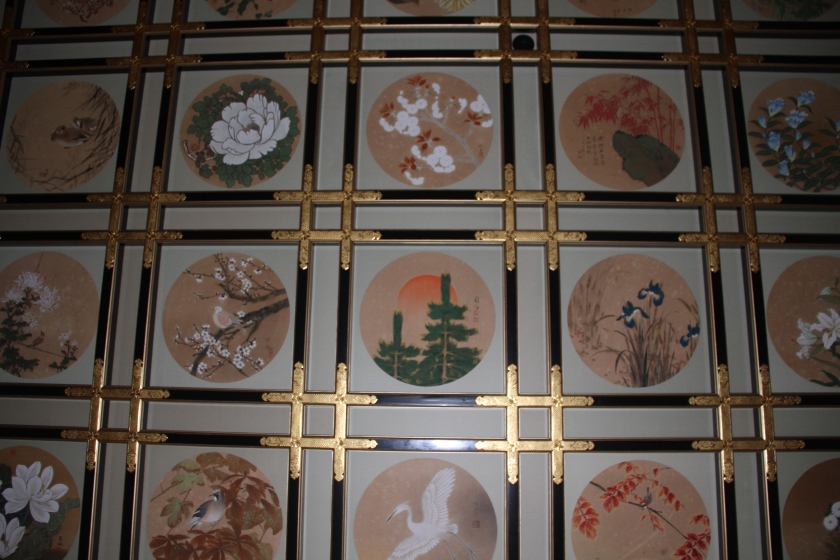 The extravagance immediately stopped in that room, as we followed the way to the main building. The tatami and carpet on the floors, the sconces lining the wall and the decorated ceilings dissipated.The rest of the temple was tranquility unbound.

I could see why someone would choose to study there to escape the superficial forms of life. Apart from the abundance of nature outside the walls, only the minuscule things could distract a keen mind. There was a doorway we passed, where the line of visitors slowed and hushed and peered in. Monks were lined sitting seiza on pillows facing wooden barriers inches away from their face. I can only imagine that room isn’t the most ideal for meditation as anyone squeaking by with their mumbles and coughs could wreck a train of unthought.

The entire structure was built from wood, and in Japanese tradition probably lacked any nails or metal holding it together. We walked up steep slanted steps peering through the plastic covered windows to what seemed like the main ceremony hall. 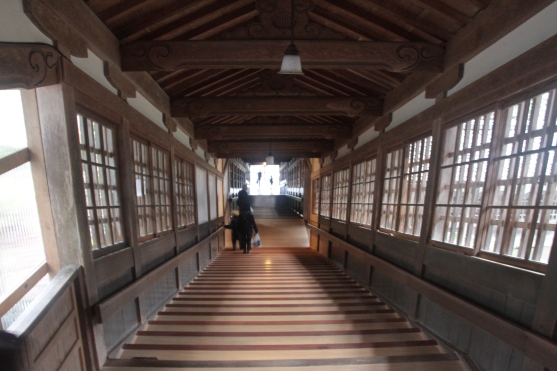 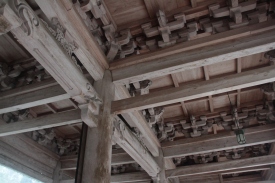 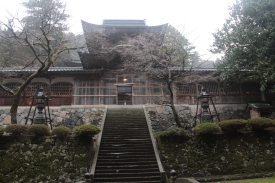 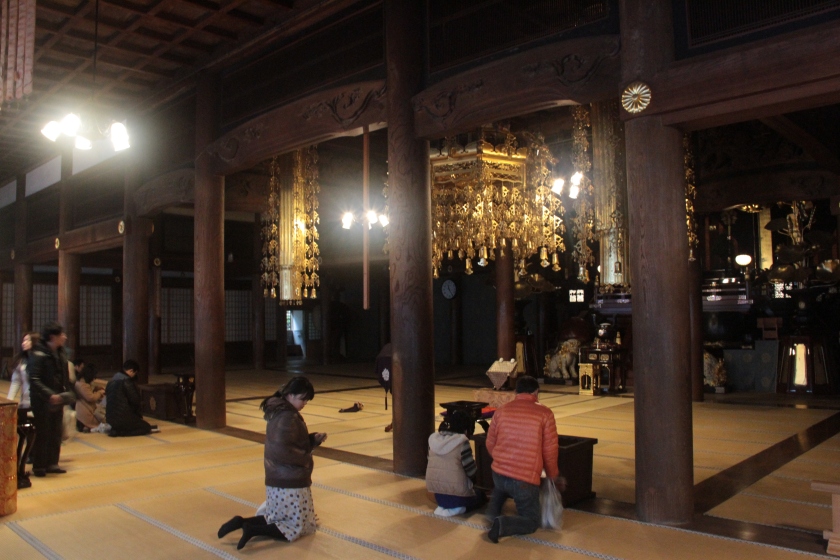 Apart from the gold it was actually pretty dull without a high ISO. I saw some pictures of the space being used full of light and people and it does seem like a fantastic thing to join in. It’s pretty hard to imagine living in that space. First, it is saturated with traditions and rules and systems that even growing up around the culture doesn’t prepare you for immersion in the lifestyle. I have a third year student who recently wrote a speech about how when he graduates high school he wants to become a monk. I don’t wonder the reason why so much as to how. The whole thing seems like quite the process. Also, there’s the slight inconvenience of having no heat. I mean, I get that you can stoke fires and everything, but I struggle every night not to run up the electric bill with my air con, and I certainly didn’t take off my coat anytime walking around there. I wonder what the constant feeling of cold in the monks robes must be like. I get the appeal of camaraderie and life skills and finding inner truth through hours of meditation. Except there is such a history that you’re carrying on your shoulders, it seems like quite the burden as well. I wonder if it’s much like a men’s college cross country team. 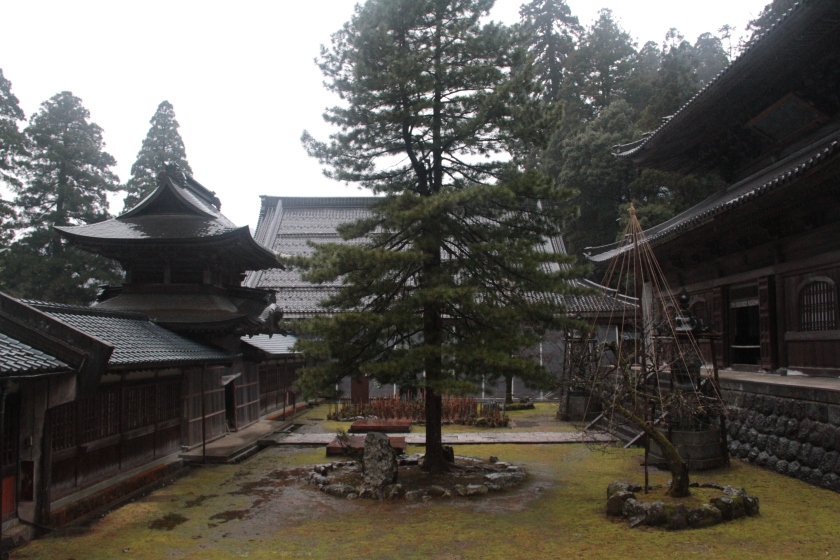 All in all, quite a good place to contemplate. There really isn’t too much to see, but in that case it also makes it a good day trip–especially if you bring obento. I think I’ll have to go again in the spring to see all the flowers blooming, and it is certainly full of color in the fall as well. It’s strange to think about how long the temple has been around, nearly 800 years, and even perhaps how constant its culture has been through that time. Compounding that incredulity is the comparison to some of the places I went to in Germany with a history equally as long. These places existed in the same Earth, but in such different worlds. 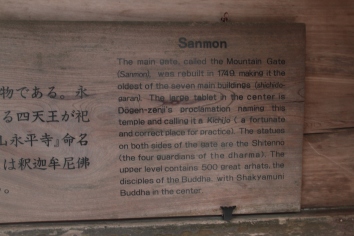 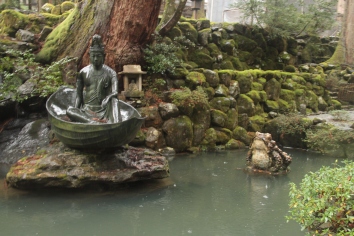 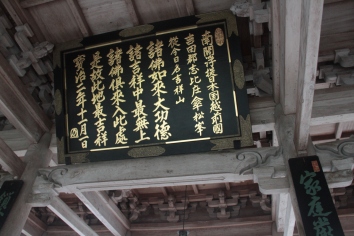 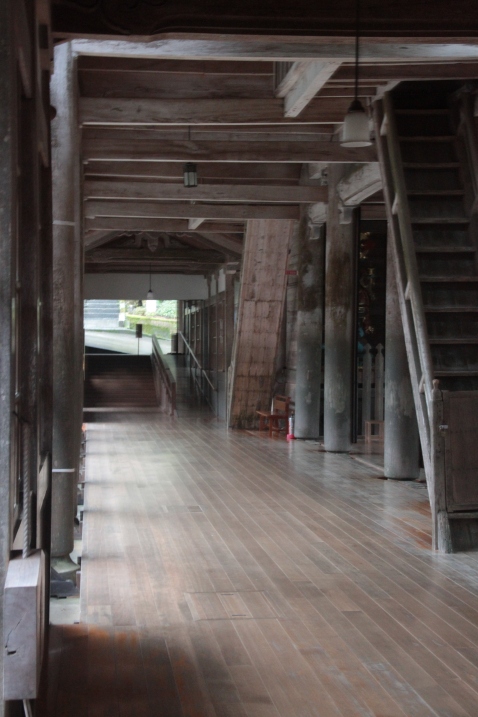 I’ll wrap up before I get too deep and embarked on my own meditation of time. In college I learned an amount about religion in Japan (unbelievably enough to have written a twenty page paper about the history of Shinto), and since that time I’ve even been able to retain some of it. In my senior seminar “Buddhism, Peace and Justice” taught by the beatific Barbara Reed we learned about a practice of meditation called Vipassana. There have been many revivals and uses of it in the past couple decades, and I’ve looked into retreats here in Japan that offer the ten day teachings. I don’t want to go into it unprepared, but who knows. Maybe next time i have a vacation I’ll give it more thought. Sometimes the real meaning of a break is not going out to the most decadent places, but realizing what you don’t need to have in the world