It reminded me of the first time I lived there studying abroad, and even a bit of my life in New York. I’ve been going back and forth on Tokyo ever since I left four years ago. It’s a sprawling but dense city of monotone concrete but eccentric culture. The pros and cons are bipolar and throw off any scale you try to weigh them on. You can’t find a trash can anywhere and yet the streets are sterile. The nature is equally as sparse apart from tourist traps and out of the way parks of which there is an abundance. Foreign people are few enough to stand out, but common enough to not warrant overt friendliness. It’s a dream city where literally any hobby is respected and any behavior tolerated — if not first marginalized. It is one of the most expensive cities in the world (beating out any city in America), and despite shrinking apartment sizes it’s ranked high for quality of life.

Last year I wrote a length about it when I went with Carmelo to celebrate a concert and Silver Week. It was hardly thought out, nearly affordable, but still a decent amount of fun to be had.The days before I was getting a paycheck, could remember how to speak Japanese, or even knew how to enjoy the city as a non-tourist, non-student. This year the holidays lined up well enough that I could take a Wednesday off and still have up to six days of vacation. Longing for the summer freedom again, I figured the end of September was good enough as any anniversary to make another venture to the city, my first in a year.

My weekend wasn’t as long as I’d originally thought because of the two day culture festival the bit into the first Saturday. Now, the culture festival is great. I took plenty of pictures I’d love to post here. I had franks on a stick, fried chicken, ice cream bars, shaved ice, donuts, juice, and a matcha flavored cream puff before I felt like I couldn’t eat anything more. The talent show was pretty entertaining, though I did feel a lingering nostalgia too that shadowed everything a bit. This was about the time I really started knowing my students last year, finally remembering their names, and caring about their successes. I couldn’t help wondering what would happen in a years time, and no matter what happens my favorite class (the current third years) wouldn’t be around.

That all, however, was on Friday. It’s Saturday that really bites. Twenty-one classes — luckily, because last year it was twenty-four — performed songs, usually traditional staples, one after another the whole day in the gym. Last year I remember falling asleep a little too early, but this time I managed to stay alert the whole time. Perhaps I can thank two surprises. A bit before lunch one of the English teachers who switched schools at the start of this year, showed up. He’s the same guy I went to Kyoto with, so the rare moments he shows up are always good. Then in the afternoon one of last years third years found me. He was the same student who I’d spent three months with working on the English speech contest. His was visiting because his younger brother is a second year. At first I was shocked just to see him, a bit taller with the adolescent badge of a sparse peach-fuzz mustache along his lip, but then he started talking and I was flabbergasted. Last year I felt like I had to pry words from his mouth, even as he was rehearsing his speech. Now, however, we were speaking almost normally. He told me he’d visited Australia for two weeks, joined the archery club at school, and had a continued hobby for guns. Not for the first time since my birthday did I feel like an old man. This kid had only graduated four months ago, and already he’d changed so drastically. Sometimes I feel like I’m wasting precious time.

So, the Saturday was worthwhile if not monotonous. I took an afternoon shinkansen the following Sunday with just my backpack and an umbrella. The weather on my side of Japan was holding out, but in the midst of rainy season with a typhoo on the way, I’d learned not to take chances. I got off the train at Tokyo station and instantly remembered why I hated the city. Tokyo station is a distilled version of all that’s bad. It’s a tangling mess with multiple floors, thousands of people, and every direction. There are gates that exit, gates that go to different trains, gates for trains that go to different cities. You can wrap your way around hallways of shops that sell nothing but tiny packaged sweets to give out as gifts to your co-workers without ever seeing an exit sign. Certainly some for of direction is intended by the way the floor plan is laid out, but really people just dash in and out like a school of fish. Occasionally, especially at night, it’ll slow down, but then you’ll just see the people overworked, or homeless, or drunkenly stumbling and passing out from the clubs. With that in mind, and excluding its sprawl, it is also effective as the quintessential station. You’re either going or leaving, and never wanting to stay.

By this point I realized I might’ve packed a bit too much, too. I would inevitably be shopping and buying things, so I probably didn’t need the spare book to read, the extra clothes. I even brought running clothes and shoes only to be neglected. Carmelo was at the same concert we’d gone to last year, so I was stuck making my way to his apartment outside Shinjuku. Another two friends of ours were staying with him this weekend, too, so I decided to try and meet up with them. After stopping for a hour or two at a cafe, I decided to ditch my bag at a station locker to lose the weight and head out to start my night. I’d messaged my college roommate Yasushi who’s now working in Tokyo doing important things. We planned to meet at the Hachiko statue in Shibuya (a place I thought I knew, but in fact didn’t actually know) but eventually we found out way out to a dive for drinks and food. It didn’t feel like a year since we’d last seen each other, but I could tell his time at grad school in DC had matured him. He spoke way more fluently, and I was happy to see he hadn’t gotten fat (even if smoking was an occasional vice). We caught up well over the next two hours, and then went back to the statue to join up with Carmelo and friends. I offered for him to come with, but a bit more responsibly he declined because he had to work in the morning.

The remaining five of us — the unemployed Carmelo and his girlfriend, and vacationing ALTs — did not have to work. So, fresh off the vibes of an outdoor EDM concert, Carmelo took us down the streets with Coke bottles of gin and ginger beer in hand to what is one of Shibuya’s most reputed nightclubs: Womb. I’d like to say I went into it open minded, but the appeal was almost instantly lost to me. Through a smoky entrance, ￥3000 cover charge, and the grim realization that we’d have to stay out until the first train at 5am I tried to disagree with the fact that I was not drunk enough. Nor was the club packed enough. There were plenty of people, as it was deemed the after party for the mentioned concert, but there was certainly open space, too. I went through the crowds, occasionally dancing, trying to work up a sweat to at least seem like I was having a better time. As the night wore on, it simply became a meditation for survival more than anything, though, I did have some fun embarrassing moments with some local Tokyolites. 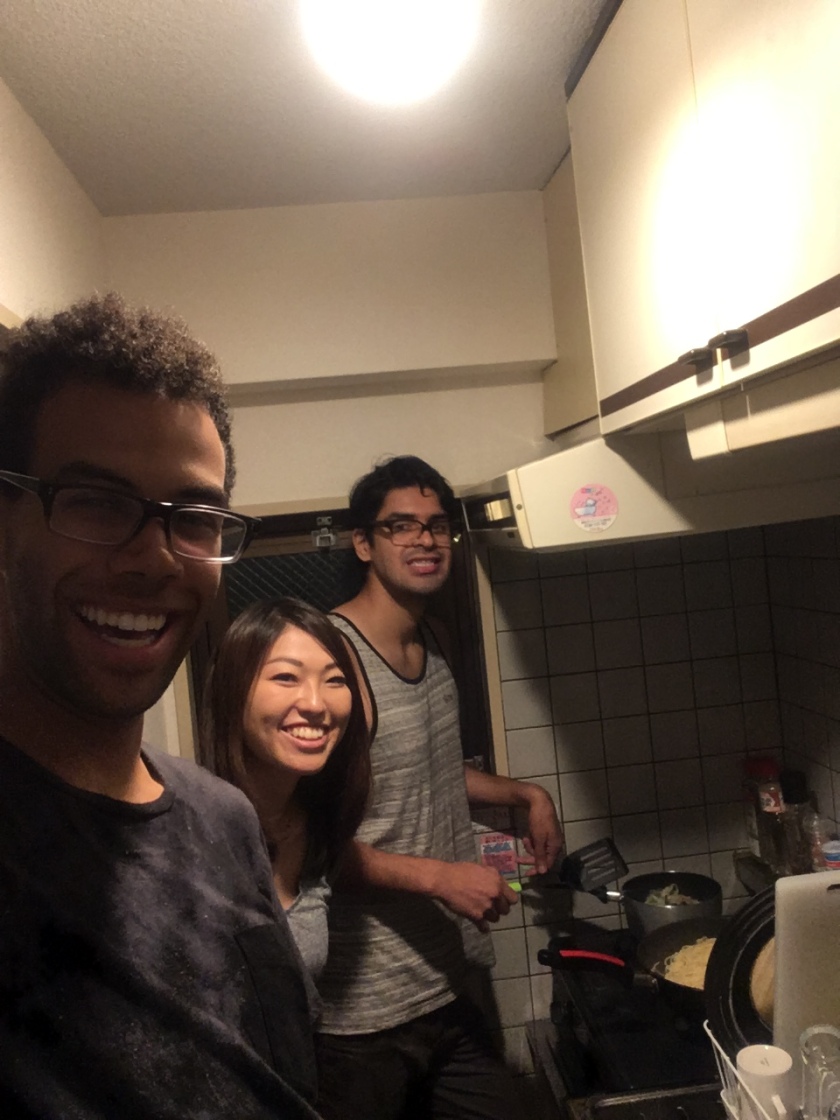 We did make it on the first train back to the apartment, and I did pass out until two o’clock the next afternoon. Carmelo, Eri, and I left the apartment bravely at my prompting under clouding skies. By the time we’d made it a block the sprinkling mist was turning to a full shower, but I was determined to make it to the same event I went to last year: the Tokyo Art Book Fair. As cheapskates we decided to walk the hour to the campus it was held. My raincoat, pants, and shoes were fully saturated, but also so was everyone else. It also made the place feel a bit more crowded since everyone was inside roaming the aisles, trying to get away from the rain. We perused, I bought some postcards, but nothing as good as last year. One the way home we diverted under a train overpass, and stopped by a specialty food store to pick up some curry for dinner.

That night we stayed up catching up on the latest episodes of the anime Dragonball Super, a weekly ritual we used to do. The next two days were still just as rainy, and just as lazy. I think I slept until noon both Tuesday and Wednesday. Following a small breakfast and we planning I went out to find the geekiest shops around. We started in Shibuya, but I also ran solo to Ikebukuro and Akihabara, discovering some new places that I hadn’t really explored. Usually when I’m out travelling alone I don’t have too much fun, but Wednesday when I set off by myself I was kind of having fun. I think this time without having to lug a backpack around, or be on a time constraint to check in somewhere really helped. That night, meeting up with Yasushi, we went out to Shinjuku, trying to wind up at a club that I’d enjoyed as a college student. Eventually we got there and the passage of almost five years felt like nothing. If it’s to get from point A to point B without any references, I’m usually a dunce for directions. But give me a place I’ve visited before and I can trace my way through parts like it’s my hometown. So being there in the night, a bit more refreshed and at the end of a vacation, felt a little bit better than the start of the week. I had a good time, stayed out all night, and didn’t mind catching the first train home.

I took the night bus home the next day, almost missing it when I couldn’t find the right loading zone. It was a grueling 8 hours and some of the worst time I’ve spent traveling.

Nonetheless, I had already started planning when I’d be going back.